DOWNLOAD THE GAME FREE
ramdemo.zip - 1,293k - Run RAMDEMO.EXE to play
Downloading ...
Found your game? Great! Glad you found it! Please consider saying thanks by making a small donation to support DOSGames.com. There are also other ways you can help!
Need help running the game? Check our DOSBox Guide to run DOS games on modern computers.

DOSGames.com Review:  Rating: 2.5
Terminator: Rampage is a 3D shooting game from Bethesda, one of several in their early/mid 90's line of Terminator FPS games. Compared to some of the other games in the series, it's not quite up to the same level. The engine is a bit clunky (the game was released just before DOOM but is technically way behind) and the turning speed feels exceedingly slow compared to how fast you move forwards. The level design feels like a confusing maze with walls that are all the same color. There are enemies to fight, and each pops up an information box when you target them which is nice, but really you treat each the same way and shoot them until they blow up.

If you enjoy Terminator: Rampage, you might also enjoy playing these games: 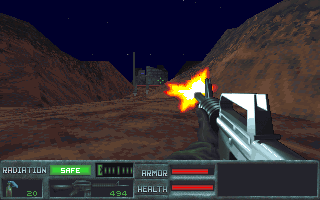 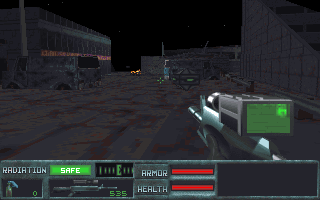 Terminator: Rampage, #775. Added to website: 2018-11-28. All copyrights, trademarks, etc, are property of their respective holders.
Back to top
Rating:
Saving
Saving, please wait
What is a file_id.diz file?
FILE_ID.DIZ is a plain text file containing a brief description of the content in an archive (ZIP file), usually written by the developers themselves. It was often used in archives distributed through bulletin board systems (BBS).
Terminator: Rampage screenshot