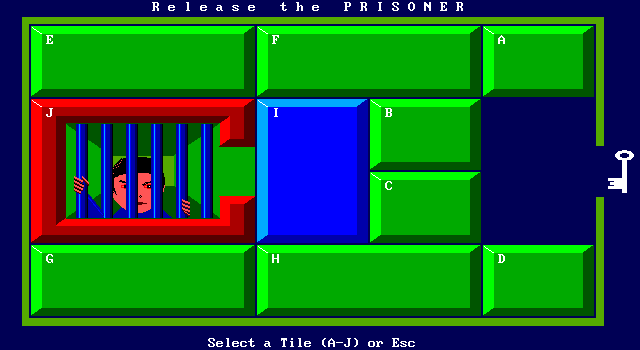 The 2020 holiday logo features a still image from Sierra On-Line Inc's 1986 "A COMPUTER CHRISTMAS" card. This was a promotional animation intended for stores to run on their in-store demo computers. Watch the linked video to see/hear it in action!

A crudely reskinned Duke Nukem makes an appearance as Santa in 2018's festive holiday logo, the 18th year in a row that DOSGames.com has featured a holiday logo!

Rather than creating an entirely new logo, 2017's logo simply reskins the classic DOSGames.com text and adds a pixelated present and holiday message.

The 2016 logo again goes with an ASCII character theme, this time a simple tree and plain black background. Classy.

Going old-old school with ASCII characters only for 2015!

Less inspired than the previous year, this simple blue-background logo for 2014 features the Christmas tree from D/Generation (it only appears if you play the game near Christmas!) and of course one of the Vorticons from the Commander Keen games.

The 2013 logo, painstakingly constructed from elements from the Commander Keen series of games, took quite awhile to construct but I think the effect is worth it. :) Original size and double size versions available. Download the free Keen games here. Also check out the Commander Keen History at 3D Realms.

Carrying on the 10 year tradition, here's the DOSGames.com 2011 Christmas logo, featuring several DOS game characters. How many can you identify? :)

Whee, it's the Christmas 2008 logo. I went for a simpler, more retro-pixelated look this year. The little guys are of course Santa lemmings from Holiday Lemmings.

A nicely patterned Christmas logo from 2005.

Christmas version of the logo, shown briefly in Dec 2004.

The logo from 2004 until 2018! It was only updated slightly to match the new design when DOSGames.com v2.0 was released.

Still looks decent, one of my favorites. From 2003.

An inappropriate font, I'd say. Earliest from 2000 probably.

Not sure if I ever used this one, but it looks alright. Last from 1999.

This one was around for awhile if memory serves me ...

This would've been made using Xara Webstyle.

Another really old one, used for awhile in 1999.

The oldest one I could find.
I think I used Microsoft Word Wordart to make this back in Jan 1999.

A failed attempt at a new look using a premade Photoshop action.

I was going to redesign the whole site back in late 2003, and this was going to be the new logo.
The redesign never happened of course. ;)