DOWNLOAD THE GAME FREE
applemanor.zip - 25k - Run APPLE.COM to play
Downloading ...
Found your game? Great! Glad you found it! Please consider saying thanks by making a small donation to support DOSGames.com. There are also other ways you can help!
Need help running the game? Check our DOSBox Guide to run DOS games on modern computers.

DOSGames.com Review:  Rating: 2
Beneath Apple Manor is one of the earliest examples of what now is usually termed a "roguelike" game. It's a primitive RPG (originally released on the Apple II platform in 1978!) where you are on a quest to find the Golden Apple while exploring randomly generated dungeons; and only dungeons, there are no other locations. Although there is no character creation per se, you do get to customize the difficulty of the dungeons and a few other options when you start the game. (I recommend NOT accepting the "standard game" and choosing an easier difficulty if you want to survive!) Since it's such an early game it lacks many of the features that later games have, but it's an amazing early example of a game with randomly generated levels. Note: Choose "R" (RGB) for graphics mode when playing in DOSBox. (Author Don Worth has released the game for free on his website.)
Instructions:
Keyboard commands courtesy Home of the Underdogs:
(Commands denoted with * can produce noise which attracts monsters within 3 squares of distance)

If you enjoy Beneath Apple Manor, you might also enjoy playing these games: 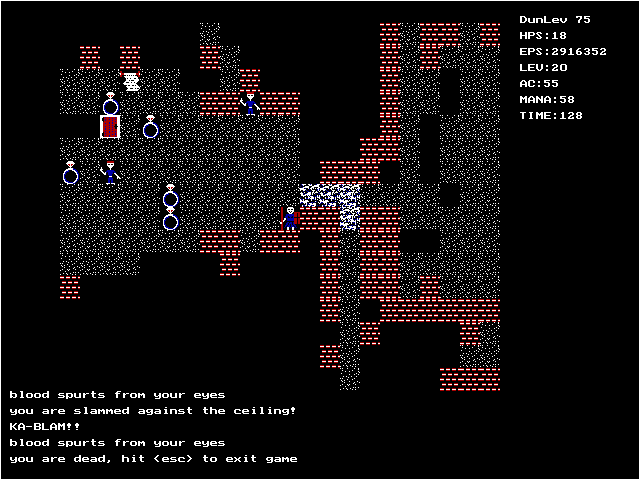 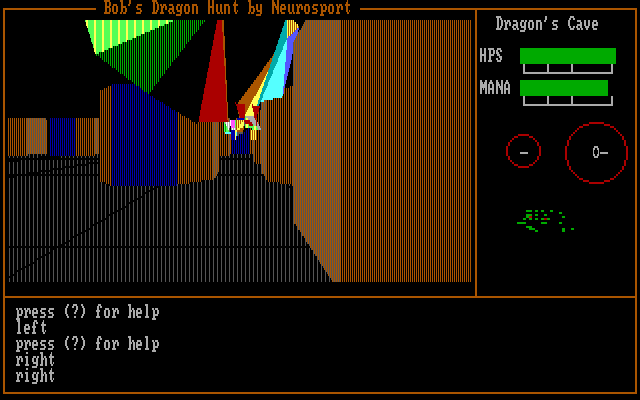 Play Beneath Apple Manor in Browser

Beneath Apple Manor, #879. Added to website: 2019-05-07. All copyrights, trademarks, etc, are property of their respective holders.
Back to top
Rating:
Saving
Saving, please wait
What is a file_id.diz file?
FILE_ID.DIZ is a plain text file containing a brief description of the content in an archive (ZIP file), usually written by the developers themselves. It was often used in archives distributed through bulletin board systems (BBS).
Beneath Apple Manor screenshot