DOWNLOAD THE GAME FREE
thetomb.zip - 81k - Run TOMB.EXE to play
Downloading ...
Found your game? Great! Glad you found it! Please consider saying thanks by making a small donation to support DOSGames.com. There are also other ways you can help!
Need help running the game? Check our DOSBox Guide to run DOS games on modern computers.

DOSGames.com Review:  Rating: 3
The Tomb (not to be confused with Pharaoh's Tomb, also available on DOSGames.com) is a remake of, or at least highly influenced by, the Tutankhamen arcade/home video game that was originally released in 1982. Like that game, the goal is to collect treasure and avoid enemies like snakes. This version plays quite well, although the controls are a bit iffy at times. Decent graphics and classic gameplay, especially if you've played the original arcade game.
FILE_ID.DIZ:
THE TOMB By Nexus Software.  Play the part
of an adventurer seeking the buried treasures
of an Egyptian Pharoah.  Pick up keys, unlock
doors, gather prizes, shoot monsters, and use
flash bombs.  Teleport to secret areas.  Pick
difficulty level.  Level completion timer and
and alarm.  Keyboard or joystick.  Requires
286 or higher and VGA.

Play The Tomb in Browser

If you enjoy The Tomb, you might also enjoy playing these games: 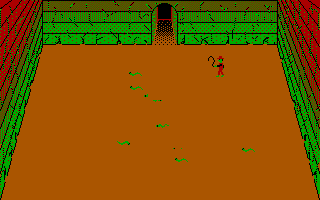 The Tomb, #115. Added to website: 2017-11-23. All copyrights, trademarks, etc, are property of their respective holders.
Back to top
Rating:
Saving
Saving, please wait
What is a file_id.diz file?
FILE_ID.DIZ is a plain text file containing a brief description of the content in an archive (ZIP file), usually written by the developers themselves. It was often used in archives distributed through bulletin board systems (BBS).
The Tomb screenshot