DOWNLOAD THE GAME FREE
tacotemple.zip - 1,201k - Run TEMPLE.BAT to play
Downloading ...
Found your game? Great! Glad you found it! Please consider saying thanks by making a small donation to support DOSGames.com. There are also other ways you can help!
Need help running the game? Check our DOSBox Guide to run DOS games on modern computers.

DOSGames.com Review:  Rating: 2.5
Taco Bell apparently released this game in 2000 as a pack-in with their kid's meals. This seems quite late for a DOS-based game, but anyways ... You play as Baja Bill (why not Taco Bill?!) and your noble quest is to explore the temple filled with product placements for Taco Bell products. Fun? Well, the game engine isn't too bad for a free game, although it was many years since Wolf 3D, Doom, and even four years since the release of Quake by this point, so they could've done better. Attack enemies using your Taco Bell sauce packets and collect food for health. It's a rather short game, as you might expect, with not a lot of variety. Definitely not as good as the Chex Quest promo games. (This game runs slowly in-browser, download and run in DOSBox and it'll run full speed.)

If you enjoy Taco Bell: Tasty Temple Challenge, you might also enjoy playing these games: 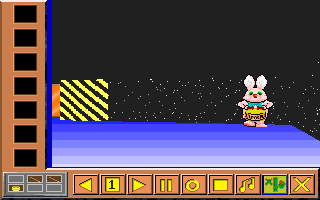 Taco Bell: Tasty Temple Challenge, #1024. Added to website: 2019-11-27. All copyrights, trademarks, etc, are property of their respective holders.
Back to top
Rating:
Saving
Saving, please wait
What is a file_id.diz file?
FILE_ID.DIZ is a plain text file containing a brief description of the content in an archive (ZIP file), usually written by the developers themselves. It was often used in archives distributed through bulletin board systems (BBS).
Taco Bell: Tasty Temple Challenge screenshot