DOWNLOAD THE GAME FREE
DOSBOX_SNFP.ZIP - 1,692k
Downloading ...
Found your game? Great! Glad you found it! Please consider saying thanks by making a small donation to support DOSGames.com. There are also other ways you can help!
Need help running the game? Check our DOSBox Guide to run DOS games on modern computers.

Original archive (SNFP.zip, 1,778k) - The main download link above works in DOSBox after unzipping; the file SNFP.zip is the original.

DOSGames.com Review:  Rating: 2.5
Without a doubt, the strangest game using Ken Silverman's Build Engine that I've ever seen. Started when the author was 12, this project looks nothing like the typical dark and gritty 3D FPS games we've come to expect. With graphics that look like they were drawn in MS Paint, and music that sounds "sparse" at best, this is likely unlike anything you've played before. The storyline is too long to recount here, but it's described on the game's official website. The game is technically impressive (certain features seem to be added to the Build Engine) and clearly a lot of work has gone into it. This version is the latest, the "Fotom Pack" which includes five full missions, each with multiple levels. At the same time, it can be difficult to play, at least in DOSBox, since it can sometimes move slowly, and the visuals and sound effects can be exceedingly distracting. Is it art? Or a game? Or both? Or neither? Definitely a labor of love that's worth seeing! (More discussion of the game is available on the DoomWorld forums.) NOTE: I found that to run this in DOSBox I had to increase the memory size (ex, run "MEMSIZE 32"). That's in native DOSBox on Windows, I haven't got it running in-browser yet!

If you enjoy Shaw's Nightmare, you might also enjoy playing these games: 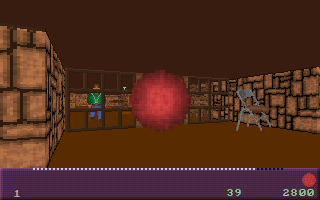 Shaw's Nightmare, #653. Added to website: 2018-08-04. All copyrights, trademarks, etc, are property of their respective holders.
Back to top
Rating:
Saving
Saving, please wait
What is a file_id.diz file?
FILE_ID.DIZ is a plain text file containing a brief description of the content in an archive (ZIP file), usually written by the developers themselves. It was often used in archives distributed through bulletin board systems (BBS).
Shaw's Nightmare screenshot