DOWNLOAD THE GAME FREE
Sango_Fighter.zip - 1,774k - Run SANGO.EXE to play
Downloading ...
Found your game? Great! Glad you found it! Please consider saying thanks by making a small donation to support DOSGames.com. There are also other ways you can help!
Need help running the game? Check our DOSBox Guide to run DOS games on modern computers.

DOSGames.com Review:  Rating: 3
Sango Fighter is a game that looks better than it actually plays. Inspired by the extremely popular Street Fighter series of games (and the dozens of clones that SF2 inspired) Sango Fighter likewise features detailed and interesting looking characters fighting in one-on-one combat. Each character has unique special moves; however they are not easy to pull off. The shareware version allows you to select one of five fighters, and play in tournament, battle, and two player vs modes. As stated above, although this game looks great. The sounds and music are decent as well. However the gameplay is a little choppy, and it's not too easy to pull off the characters' special moves. That, combined with only having 5 playable characters, make it much less fun than SF2 which it's emulating. Definitely worth trying out though as an example of what was possible in the early 90's DOS environment compared to the arcades of the era. (Sango Fighter features English, Chinese, and Japanese language options.)

If you enjoy Sango Fighter, you might also enjoy playing these games: 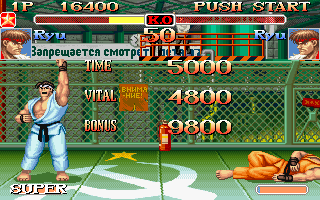 Sango Fighter, #696. Added to website: 2018-09-23. All copyrights, trademarks, etc, are property of their respective holders.
Back to top
Rating:
Saving
Saving, please wait
What is a file_id.diz file?
FILE_ID.DIZ is a plain text file containing a brief description of the content in an archive (ZIP file), usually written by the developers themselves. It was often used in archives distributed through bulletin board systems (BBS).
Sango Fighter screenshot