DOWNLOAD THE GAME FREE
DOSBOX_RAVAGE.ZIP - 1,298k - Run RAVAGE.EXE to play
Downloading ...
Found your game? Great! Glad you found it! Please consider saying thanks by making a small donation to support DOSGames.com. There are also other ways you can help!
Need help running the game? Check our DOSBox Guide to run DOS games on modern computers.

Original archive (ravage11.zip, 1,329k) - The main download link above works in DOSBox after unzipping; the file ravage11.zip is the original.

DOSGames.com Review:  Rating: 3.5
Ravage is a game that is seemingly heavily influenced by Raptor and Tyrian which appeared in 1994 and 1995, respectively. It's a vertical shooter with great graphics including parallax scrolling, pumping techno soundtrack, and decent sound effects. Your goal, as usual for shoot-em-ups, is to shoot everything and avoid getting shot! If you run out of lives, you'll need to start the level over again from the beginning. While no powerups appear during gameplay, you earn credits which can be used to purchase upgrades after each level, including more extra lives. Only two levels are available to play in the shareware version. One great feature is that it allows simultaneous two-player mode, with player one using the keyboard and the other using the mouse. (You can change control options within game to use mouse when playing a single-player game.) It's safe to say that if you enjoy games like Raptor and Tyrian, you'll probably enjoy Ravage as well!

If you enjoy Ravage, you might also enjoy playing these games: 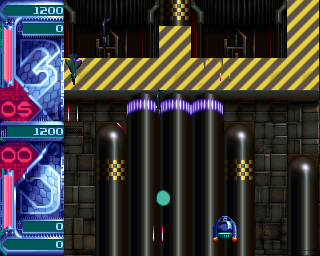 Ravage, #746. Added to website: 2018-11-03. All copyrights, trademarks, etc, are property of their respective holders.
Back to top
Rating:
Saving
Saving, please wait
What is a file_id.diz file?
FILE_ID.DIZ is a plain text file containing a brief description of the content in an archive (ZIP file), usually written by the developers themselves. It was often used in archives distributed through bulletin board systems (BBS).
Ravage screenshot