DOWNLOAD THE GAME FREE
nite3d20.zip - 917k - Run N3D.EXE to play
Downloading ...
Found your game? Great! Glad you found it! Please consider saying thanks by making a small donation to support DOSGames.com. There are also other ways you can help!
Need help running the game? Check our DOSBox Guide to run DOS games on modern computers.

DOSGames.com Review:  Rating: 3
From the creator of Hugo's House of Horrors comes this 3D shooter. (Previously misnamed on this website as "Nightmare 3D".) It's technical level is about the same as Wolfenstein 3D, but it DOES include some cool new stuff. The campy pseudo-horror motif is well done, and generally it's not entirely tedious to play, albeit unpolished and clearly an attempt to capitalize on the popularity of the then-new 3D shooter genre.

If you enjoy Nitemare 3D, you might also enjoy playing these games: 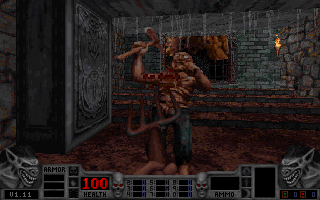 Nitemare 3D, #20. Added to website: 2017-10-24. All copyrights, trademarks, etc, are property of their respective holders.
Back to top
Rating:
Saving
Saving, please wait
What is a file_id.diz file?
FILE_ID.DIZ is a plain text file containing a brief description of the content in an archive (ZIP file), usually written by the developers themselves. It was often used in archives distributed through bulletin board systems (BBS).
Nitemare 3D screenshot