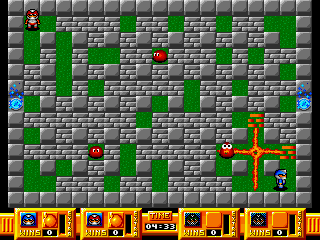 DOWNLOAD THE GAME FREE
DOSBOX_NICOLAUSI.ZIP - 345k - Run NICO.EXE to play
Downloading ...
Found your game? Great! Glad you found it! Please consider saying thanks by making a small donation to support DOSGames.com. There are also other ways you can help!
Need help running the game? Check our DOSBox Guide to run DOS games on modern computers.

Buy the full version of Nicolausi

Original archive (i_nicoi.zip, 367k) - The main download link above works in DOSBox after unzipping; the file i_nicoi.zip is the original.

DOSGames.com Review:  Rating: 2.5
Santa is in trouble! He's lost his presents, and his list telling him which presents go to which house! So he must navigate the maze-like streets of the city, finding presents, and attempting to deliver them to the correct house. And of course, the Easter Bunny is chasing him with his boom box, and if he catches Santa, the Easter Bunny will kick his ass! Well, this all sounds normal and reasonable. It's sort of a maze game, but with action, since you have to avoid the Easter Bunny. You pick up presents and deliver them to houses, but there's apparently no way to know which present goes to which house, so you just have to hope you get lucky. The graphics and sounds are good, and there are powerups and extra items to collect, however the core game mechanic just doesn't seem too appealing. If there was some way to know which present went with which house, it might be better, but as-is, it can be rather frustrating!

If you enjoy Nicolausi, you might also enjoy playing these games: Buy full version
Nicolausi, #791. Added to website: 2018-12-12. All copyrights, trademarks, etc, are property of their respective holders.
Back to top
Rating:
Saving
Saving, please wait
What is a file_id.diz file?
FILE_ID.DIZ is a plain text file containing a brief description of the content in an archive (ZIP file), usually written by the developers themselves. It was often used in archives distributed through bulletin board systems (BBS).
Nicolausi screenshot