DOWNLOAD THE GAME FREE
DOSBOX_NHL96.ZIP - 2,923k - Run NHLDEMO.EXE to play
Downloading ...
Found your game? Great! Glad you found it! Please consider saying thanks by making a small donation to support DOSGames.com. There are also other ways you can help!
Need help running the game? Check our DOSBox Guide to run DOS games on modern computers.

Original archive (nhl96.zip, 2,971k) - The main download link above works in DOSBox after unzipping; the file nhl96.zip is the original.

DOSGames.com Review:  Rating: 4
Described upon release as being "the best PC hockey game released yet" (CGW, Jan 1996) NHL 96 debuted EA's Virtual Stadium, with a 3D feel even without a 3D accelerator card. (Unlike the SNES version which retained the sprite-based gameplay of the previous games.) This demo version allows you to experience a taste of what the full game offers (sans music) by playing a short game between the Detroit Red Wings and the New Jersey Devils. (Make sure to change at least one player to "Human" when the demo starts up.) While not necessarily as tightly controlled as the earlier sprite-based NHL games, the transition to 3D was generally a favorable one, and allowed for more fluid animations and more realistic gameplay. (NOTE: This game may run too slowly in your browser, you may need to download it and run it locally to get full speed!)

If you enjoy NHL 96, you might also enjoy playing these games: 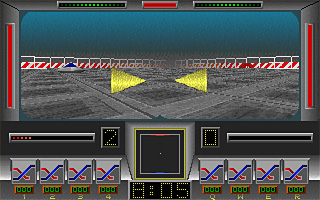 NHL 96, #711. Added to website: 2018-10-05. All copyrights, trademarks, etc, are property of their respective holders.
Back to top
Rating:
Saving
Saving, please wait
What is a file_id.diz file?
FILE_ID.DIZ is a plain text file containing a brief description of the content in an archive (ZIP file), usually written by the developers themselves. It was often used in archives distributed through bulletin board systems (BBS).
NHL 96 screenshot