DOWNLOAD THE GAME FREE
newdash231.zip - 272k - Run DASH.EXE to play
Downloading ...
Found your game? Great! Glad you found it! Please consider saying thanks by making a small donation to support DOSGames.com. There are also other ways you can help!
Need help running the game? Check our DOSBox Guide to run DOS games on modern computers.

DOSGames.com Review:  Rating: 2.5
There are many Boulderdash clones out there, probably way more than is warranted based on how good the original game is. I mean it's cool and all (with its weird physics) but there are seriously a LOT of clones out there. New Dash Dimension is a pretty good clone in most ways. It accurately represents the original's physics and style, with decent graphics and a variety of levels. It includes some tools as well as good documentation. There are some control issues though, at least when using DOSBox. You really have to HOLD the keys down to move, and that really hurts the enjoyment of playing.
FILE_ID.DIZ:
The New Dash Dimension v2.31.
released 15-dec-2000.
Freeware 1995 - 2000 by LogicDeLuxe.
(former a shareware game)

-Completely for free now
-The best compatiblity of all dash clones.
-15 practice level with selfplaying demos.
-Now runs on Pentium II and III.

If you enjoy New Dash Dimension, you might also enjoy playing these games: 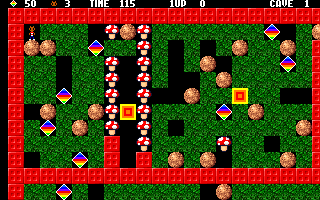 New Dash Dimension, #948. Added to website: 2019-07-26. All copyrights, trademarks, etc, are property of their respective holders.
Back to top
Rating:
Saving
Saving, please wait
What is a file_id.diz file?
FILE_ID.DIZ is a plain text file containing a brief description of the content in an archive (ZIP file), usually written by the developers themselves. It was often used in archives distributed through bulletin board systems (BBS).
New Dash Dimension screenshot