DOWNLOAD THE GAME FREE
mbridge2.zip - 194k - Run MBRIDGE.EXE to play
Downloading ...
Found your game? Great! Glad you found it! Please consider saying thanks by making a small donation to support DOSGames.com. There are also other ways you can help!
Need help running the game? Check our DOSBox Guide to run DOS games on modern computers.

DOSGames.com Review:  Rating: 3
Moraff's Monster Bridge is a trump-based card game ("a distant relative of Bridge") set in the same world as Moraff's RPGs like Dungeons of the Unforgiven. Like all Moraff games there are many video modes available (thirteen actually) and probably due to this plethora of options, the game's graphics can look a little strange at times. The gameplay here is a simple trump-type card game, except with an RPG theme and a custom card deck with six fantasy-inspired suits numbered from 1 to 16. You can only play against the computer, there is no local multiplayer. The game works well and is easy to understand, but probably won't have a lot of longevity of play. (This version of the game also comes with Moraff's Stones included.)
FILE_ID.DIZ:
This distant relative of the Bridge card game
so popular on Earth, is played frequently in
the finer taverns of Moraff's World. You will
play against Devilishly clever monsters as
you try to use your puny human brain to
defeat them! Monster Bridge has better
graphics than any card game ever produced,
including solitaire for Windows!

If you enjoy Moraff's Monster Bridge, you might also enjoy playing these games: 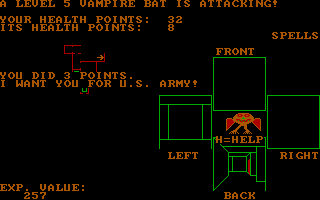 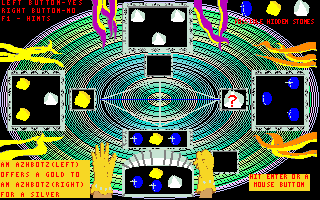 Moraff's Monster Bridge, #705. Added to website: 2018-10-01. All copyrights, trademarks, etc, are property of their respective holders.
Back to top
Rating:
Saving
Saving, please wait
What is a file_id.diz file?
FILE_ID.DIZ is a plain text file containing a brief description of the content in an archive (ZIP file), usually written by the developers themselves. It was often used in archives distributed through bulletin board systems (BBS).
Moraff's Monster Bridge screenshot