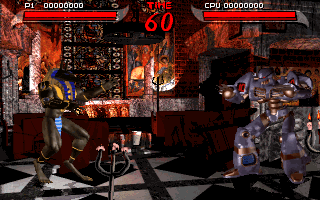 DOWNLOAD THE GAME FREE
minelay.zip - 33k - Run MINELAY.EXE to play
Downloading ...
Found your game? Great! Glad you found it! Please consider saying thanks by making a small donation to support DOSGames.com. There are also other ways you can help!
Need help running the game? Check our DOSBox Guide to run DOS games on modern computers.

DOSGames.com Review:  Rating: 2.5
Minelayer is a strange game that at first appears to be a prototype to Carr Software's more well-known Islands of Danger (aka Rescue) game. However, the game mentions Islands of Danger and provides media quotes about that game, so it must have been made/released afterwards. In any case, Minelayer seems to actually be an experiment with the Islands of Danger engine, where instead of shooting the enemy bases, you simply ram into them with your ship. To stop the enemy missiles you drop mines. The screen also switches into 40x25 text ode when playing the actual game for some reason which means you can see less of the map. Generally seems less fun than the Islands of Danger games which may explain why it's not even mentioned on the Carr Software website.

If you enjoy Minelayer, you might also enjoy playing these games: Minelayer, #1133. Added to website: 2020-06-26. All copyrights, trademarks, etc, are property of their respective holders.
Back to top
Rating:
Saving
Saving, please wait
What is a file_id.diz file?
FILE_ID.DIZ is a plain text file containing a brief description of the content in an archive (ZIP file), usually written by the developers themselves. It was often used in archives distributed through bulletin board systems (BBS).
Minelayer screenshot