DOWNLOAD THE GAME FREE
MICRO2.ZIP - 37k - Run MICRO2.EXE to play
Downloading ...
Found your game? Great! Glad you found it! Please consider saying thanks by making a small donation to support DOSGames.com. There are also other ways you can help!
Need help running the game? Check our DOSBox Guide to run DOS games on modern computers.

DOSGames.com Review:  Rating: 2.5
Micro's Dilemma II is the sequel to the original Micro game, however it was released several years before the Micro! Deluxe game. The gameplay is similar to the other games in the series, albeit with not as refined graphics, UI, and gameplay as the Deluxe version. The goal is still to cause the laser to pass through all of the spheres; you do so by aligning mirrors to reflect the laser as well as using any of the other objects on the playing field. There is some decent puzzle action here, although as mentioned the deluxe version above is probably a better choice.

If you enjoy Micro's Dilemma II, you might also enjoy playing these games: 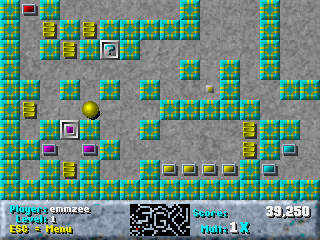 Micro's Dilemma II. Added to website: 2018-12-10. All copyrights, trademarks, etc, are property of their respective holders.
Back to top
Rating:
Saving
Saving, please wait
What is a file_id.diz file?
FILE_ID.DIZ is a plain text file containing a brief description of the content in an archive (ZIP file), usually written by the developers themselves. It was often used in archives distributed through bulletin board systems (BBS).
Micro's Dilemma II screenshot