War Games in a Maze

DOWNLOAD THE GAME FREE
mazewars.zip - 17k - Run MAZEWARS.EXE to play
Downloading ...
Found your game? Great! Glad you found it! Please consider saying thanks by making a small donation to support DOSGames.com. There are also other ways you can help!
Need help running the game? Check our DOSBox Guide to run DOS games on modern computers.

DOSGames.com Review:  Rating: 2
Maze Wars (aka "War Games in a Maze" in the game itself) is a 3D shooting game, but only barely. The game looks and plays like other earlier 3D first-person games like the similarly titled Maze War or MIDI Maze. The object is to kill all of the enemies (large rotating triangles ...) in each level before finding the exit. Although the documentation tries to market it as a "Virtual Reality" game it's very basic, and the only gameplay consists of shooting triangles and running around a non-texture-mapped maze. There IS a radar which helps you find your targets so that helps prevent you from running around aimlessly. A neat artifact of shareware gaming history (especially given its tiny 29k executable size!) but given that Catacomb Abyss and Wolfenstein 3D were released the same year, it would've been quickly overshadowed by superior games.

If you enjoy Mazewars, you might also enjoy playing these games: 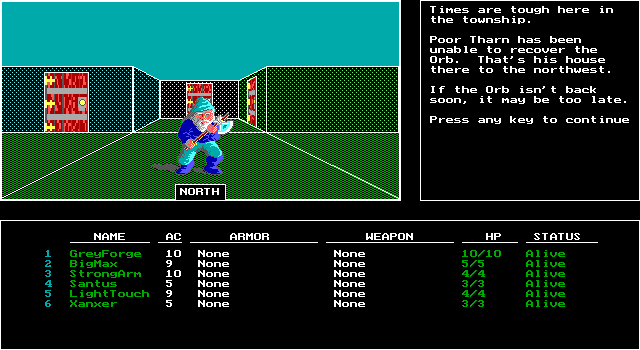 War Games in a Maze, #1138. Added to website: 2020-06-28. All copyrights, trademarks, etc, are property of their respective holders.
Back to top
Rating:
Saving
Saving, please wait
What is a file_id.diz file?
FILE_ID.DIZ is a plain text file containing a brief description of the content in an archive (ZIP file), usually written by the developers themselves. It was often used in archives distributed through bulletin board systems (BBS).
Maze Wars screenshot