Invasion of the Mutant Space Bats of Doom

DOWNLOAD THE GAME FREE
bats272.zip - 384k - Run BATS.EXE to play
Downloading ...
Found your game? Great! Glad you found it! Please consider saying thanks by making a small donation to support DOSGames.com. There are also other ways you can help!
Need help running the game? Check our DOSBox Guide to run DOS games on modern computers.

DOSGames.com Review:  Rating: 4
Nice name, eh? It certainly caught your attention! This space shooting game has pretty VGA graphics and smooth gameplay. It's got a variety of 'space bats' to kill and different ship powerups as well, somewhat in the same style as the Galaga and other games of that style (waves of enemies). Pretty good sound effects, too. Though maybe better known for the name than for anything else. (Note: I occasionally had some problems when using the keyboard in the game, although when I switched and used the mouse, I had no problems.)
FILE_ID.DIZ:
INVASION OF THE MUTANT SPACE BATS OF DOOM
Version 2.72: This PC arcade game lets you
smash wave after wave of devious, swooping,
swirling Space Bats- unless they smash you
first! Classic-style addictive shoot'em-up!
Crisp, colorful animation and hot music!
Power-up crystals and bonus rounds! Dodge,
weave, and attack to survive and save Earth!
Highly-rated by PC Gamer! DOS/Windows/Win95
EGA/VGA mouse/kb/joystck. By Pop Software.

Play Invasion of the Mutant Space Bats of Doom in Browser

If you enjoy Invasion of the Mutant Space Bats of Doom, you might also enjoy playing these games: 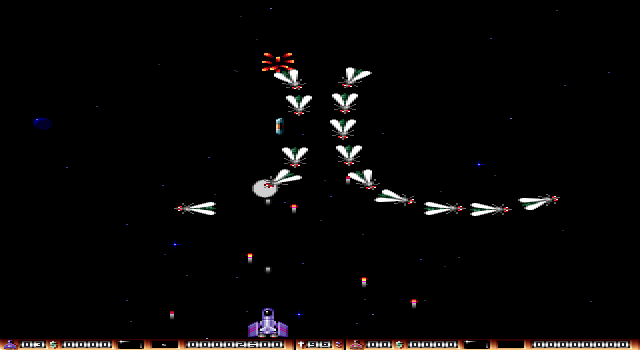