DOWNLOAD THE GAME FREE
DOSBOX_HERETIC.ZIP - 2,730k - Run HERETIC.EXE to play
Downloading ...
Found your game? Great! Glad you found it! Please consider saying thanks by making a small donation to support DOSGames.com. There are also other ways you can help!
Need help running the game? Check our DOSBox Guide to run DOS games on modern computers.

Original archive (htic_v12.zip, 2,831k) - The main download link above works in DOSBox after unzipping; the file htic_v12.zip is the original.

DOSGames.com Review:  Rating: 4.5
Based on the DOOM engine, Heretic was only mildly popular on its release because there were so many copycat 3D-shooting games released around the same time. However, Heretic is one of the better shooting games released in the pre-Quake era. It has solid level design, good graphics & sounds (although of course you're limited to 320x200) and really the only major criticism that could be leveled at it is that it's too much like DOOM.

FILE_ID.DIZ:
Heretic is a supernatural blast-fest that
is the most realistic, action-packed
fantasy combat computer game for the PC.
Created by the graphic masters at Raven
Software in concert with the technical
gurus of id Software, Heretic adds new
levels of play and graphic wonder to the
tried and true DOOM gaming environment.
486-33, 4 megs RAM, VGA, 6 megs HD space
Version 1.2
RSAC ADVISORY (tm), Violence: 3
Blood and Gore

If you enjoy Heretic, you might also enjoy playing these games: 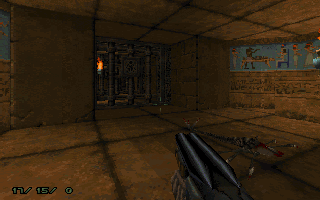 Heretic, #14. Added to website: 2017-10-22. All copyrights, trademarks, etc, are property of their respective holders.
Back to top
Rating:
Saving
Saving, please wait
What is a file_id.diz file?
FILE_ID.DIZ is a plain text file containing a brief description of the content in an archive (ZIP file), usually written by the developers themselves. It was often used in archives distributed through bulletin board systems (BBS).
Heretic screenshot