DOWNLOAD THE GAME FREE
DOSBOX_FREDDYPHARKAS.ZIP - 1,848k - Run SIERRA.EXE to play
Downloading ...
Found your game? Great! Glad you found it! Please consider saying thanks by making a small donation to support DOSGames.com. There are also other ways you can help!
Need help running the game? Check our DOSBox Guide to run DOS games on modern computers.

$Buy the full version of Freddy Pharkas at GOG.com

Original archive (FREDDEMO.ZIP, 1,271k) - The main download link above works in DOSBox after unzipping; the file FREDDEMO.ZIP is the original.

DOSGames.com Review:  Rating: 4
Freddy Pharkas: Frontier Pharmacist is one of the games that Al Lowe was the primary writer for during his time at Sierra. Besides of course the Leisure Suit Larry series. This demo version of the full graphic adventure game highlights the mouse-driven interface of the later Sierra titles, shared by other games of the time such as Space Quest IV. This game takes place during the gold rush era, and as usual you click around, die frequently, and eventually give up and use a hint guide. Sierra didn't produce many playable demos for their games; not sure why this one was chosen! But from what I've read it's an enjoyable game with rather obscure and inane puzzles that will perhaps have you reaching for that hint guide sooner than other games.

(Note: I wasn't able to get the sound working in DOSBox, so I chose PC speaker in the setup program. Run SETUP.EXE and try your luck if you want working SoundBlaster or other sounds; you may need to play with DOSBox's options to get it working.)

If you enjoy Freddy Pharkas, you might also enjoy playing these games: 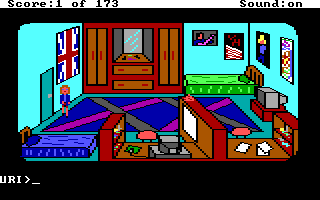 Freddy Pharkas: Frontier Pharmacist, #941. Added to website: 2019-07-22. All copyrights, trademarks, etc, are property of their respective holders.
Back to top
Rating:
Saving
Saving, please wait
What is a file_id.diz file?
FILE_ID.DIZ is a plain text file containing a brief description of the content in an archive (ZIP file), usually written by the developers themselves. It was often used in archives distributed through bulletin board systems (BBS).
Freddy Pharkas: Frontier Pharmacist screenshot