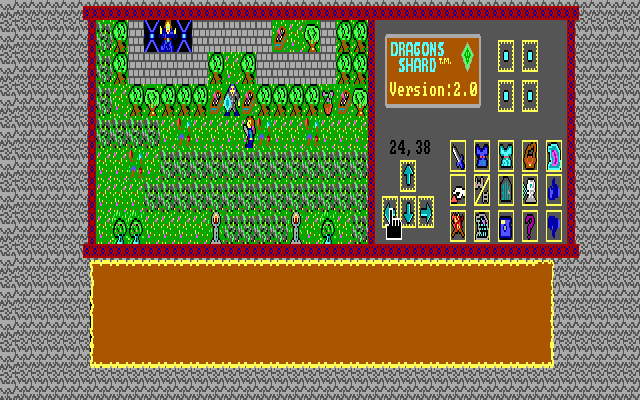 DOWNLOAD THE GAME FREE
keendreams.zip - 371k - Run START.EXE to play
Downloading ...
Found your game? Great! Glad you found it! Please consider saying thanks by making a small donation to support DOSGames.com. There are also other ways you can help!
Need help running the game? Check our DOSBox Guide to run DOS games on modern computers.

DOSGames.com Review:  Rating: 4
Keen Dreams is sometimes referred to as Keen 3.5, because it was made between the first trilogy of Keen games and Commander Keen 4: Secret of the Oracle. Originally published by Softdisk as a commercially released game, at some point they also made a shareware version. This game plays in some ways like an early test game for what would become the next series of Keen games. Unlike the other games where you have a blaster and pogo stick, here you collect stones (?) which you throw at various food-related enemies in order to stun them. The gameplay is quite similar to the later games, and the graphics are similar too (although more simplistic). Most disturbing perhaps is the fact that there is no music (at least in the shareware release) even though there is a menu option for it! (Apparently it was removed in order to fit the game onto a 360k floppy disk!) Still enjoyable to play however.
FILE_ID.DIZ:
Only you can help Commander Keen overcome the
killer vegetables which have conspired to
"clean his plate" in KEEN DREAMS, the "lost
episode" developed for GAMER'S EDGE by Keen's
award-winning creators, ID Software. King
Boobus Tuber and his Tater Troopers are ready
to take you on in this choice Keen adventure!
>>>A must-play hit for all Keen fans!<<<
KEEN DREAMS is one of 10 great games in the
"Lost Game Collection" created by ID Software
exclusively for GAMER'S EDGE!  Check 'em out!

If you enjoy Keen Dreams, you might also enjoy playing these games:

Commander Keen: Secret of the Oracle

Commander Keen: Keen Dreams, #672. Added to website: 2018-08-20. All copyrights, trademarks, etc, are property of their respective holders.
Back to top
Rating:
Saving
Saving, please wait
What is a file_id.diz file?
FILE_ID.DIZ is a plain text file containing a brief description of the content in an archive (ZIP file), usually written by the developers themselves. It was often used in archives distributed through bulletin board systems (BBS).
Commander Keen: Keen Dreams screenshot