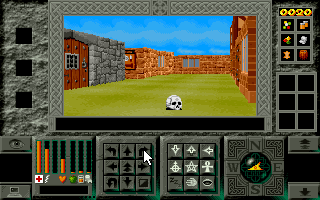 Commander Keen 1: Invasion of the Vorticons

DOWNLOAD THE GAME FREE
DOSBOX_KEEN.ZIP - 198k - Run KEEN1.EXE to play
Downloading ...
Found your game? Great! Glad you found it! Please consider saying thanks by making a small donation to support DOSGames.com. There are also other ways you can help!
Need help running the game? Check our DOSBox Guide to run DOS games on modern computers.

Original archive (1keen.zip, 238k) - The main download link above works in DOSBox after unzipping; the file 1keen.zip is the original.

DOSGames.com Review:  Rating: 4
This is the first game (the shareware one) in the original Commander Keen series, "Commander Keen in Invasion of the Vorticons". I thought that this game was SO amazing when I first played it (many years ago), and it's still quite fun now. It features great graphics (for EGA) and some not-so-annoying PC speaker sound effects. At the time, it was quite innovative due to the way that the screen smoothly scrolls. The engine was originally pitched to Nintendo for a PC Mario game, but since that never happened, Commander Keen was born to make use of it. The jumping and pogo-sticking (yes, that's a word) take a bit of getting used to ... otherwise, a great, classic Apogee platformer which spawned numerous sequels and an unofficial "mascot" for this website. :)

If you enjoy Commander Keen, you might also enjoy playing these games:

Commander Keen: Secret of the Oracle Commander Keen 1: Invasion of the Vorticons, #419. Added to website: 2018-02-10. All copyrights, trademarks, etc, are property of their respective holders.
Back to top
Rating:
Saving
Saving, please wait
What is a file_id.diz file?
FILE_ID.DIZ is a plain text file containing a brief description of the content in an archive (ZIP file), usually written by the developers themselves. It was often used in archives distributed through bulletin board systems (BBS).
Commander Keen: Marooned on Mars screenshot