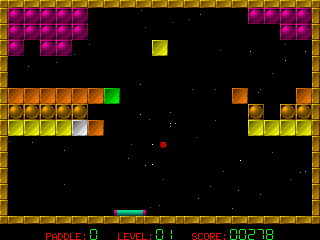 DOWNLOAD THE GAME FREE
DOSBOX_BERAS.ZIP - 7,851k - Run BERAS.EXE to play
Downloading ...
Found your game? Great! Glad you found it! Please consider saying thanks by making a small donation to support DOSGames.com. There are also other ways you can help!
Need help running the game? Check our DOSBox Guide to run DOS games on modern computers.

Original archive (BERASFull.zip, 8,081k) - The main download link above works in DOSBox after unzipping; the file BERASFull.zip is the original.

DOSGames.com Review:  Rating: 2
Battle of the Eras is a game created by a group of 14-year old developers, inspired by fighting games popular at the time, like Mortal Kombat II, Street Fighter II, and OMF 2097. It most closely seems to try to emulate the Mortal Kombat series. It has been called the "worst DOS fighter ever", and for good reason. Characters include the XLX-2250 cyborg, Ferekin, Sho-Jin, and the Gatekeeper. Although there are some positives about the game, such as its music, and the fact that the dev team captured themselves in costume as the game's characters (green-screened) there are a lot of problems. The art is very uneven, the storyline is bad, the gameplay is choppy, and there are many bugs and questionable design choices. The full registered version of this game has been released by its primary developer for free. If you are so inclined, you can make a donation to the developer at the bottom of this page. (See the included BERAS.TXT file for a list of special moves, but good luck doing them successfully ...)

Play Battle of the Eras in Browser

If you enjoy Battle of the Eras, you might also enjoy playing these games: Battle of the Eras, #686. Added to website: 2018-09-12. All copyrights, trademarks, etc, are property of their respective holders.
Back to top
Rating:
Saving
Saving, please wait
What is a file_id.diz file?
FILE_ID.DIZ is a plain text file containing a brief description of the content in an archive (ZIP file), usually written by the developers themselves. It was often used in archives distributed through bulletin board systems (BBS).
Battle of the Eras screenshot