Battle of the Elements

DOWNLOAD THE GAME FREE
DOSBOX_BE.ZIP - 165k - Run BE.EXE to play
Downloading ...
Found your game? Great! Glad you found it! Please consider saying thanks by making a small donation to support DOSGames.com. There are also other ways you can help!
Need help running the game? Check our DOSBox Guide to run DOS games on modern computers.

Original archive (be10.zip, 166k) - The main download link above works in DOSBox after unzipping; the file be10.zip is the original.

DOSGames.com Review:  Rating: 3
Battle of the Elements is a decent Othello/Reversi clone for four players. (Not three, not two ... you must have four players, either human or CPU controlled!) There is a large variety of different board layouts to choose from, but other than that (and the colorful pieces) it's much the same; duplicate a piece one space away, or jump a piece two spaces away, turning all opponent pieces you touch into your own. The game continues until only one player is left. This game also includes a separate one-player game called "Fox-Hunt" (available from the in-game menu) where you simply try to move to the exit and draw the enemies into the traps. Overall both games work well enough and are worth a try.
FILE_ID.DIZ:
Battle of the Elements v1.0

Play Battle of the Elements in Browser

If you enjoy Battle of the Elements, you might also enjoy playing these games: 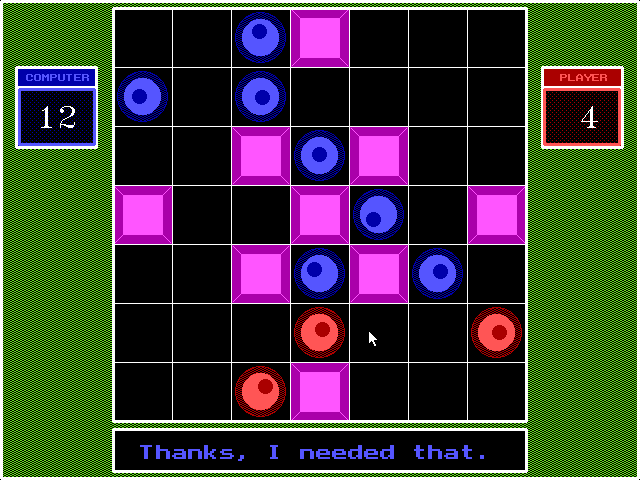 Battle of the Elements, #1095. Added to website: 2020-05-12. All copyrights, trademarks, etc, are property of their respective holders.
Back to top
Rating:
Saving
Saving, please wait
What is a file_id.diz file?
FILE_ID.DIZ is a plain text file containing a brief description of the content in an archive (ZIP file), usually written by the developers themselves. It was often used in archives distributed through bulletin board systems (BBS).
Battle of the Elements screenshot