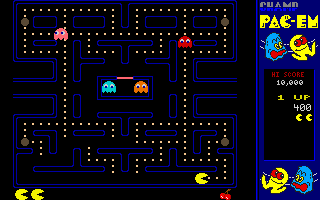 DOWNLOAD THE GAME FREE
balloonz.zip - 139k - Run BALLOONZ.EXE to play
Downloading ...
Found your game? Great! Glad you found it! Please consider saying thanks by making a small donation to support DOSGames.com. There are also other ways you can help!
Need help running the game? Check our DOSBox Guide to run DOS games on modern computers.

DOSGames.com Review:  Rating: 3.5
Clearly a takeoff of the popular Nintendo game Balloon Fight (but not quite a clone), Balloonz is an enjoyable although simple game. It's actually two games in one, just like Balloon Fight for the NES, although the games themselves are different. The first mode is dubbed "Midnight Journeys" and it's very similar to the "Balloon Trip" mode in Balloon Fight. The graphics and everything are quite close. The main difference here is that there are different levels. The second mode is called "Puff-gunners" and it's a two-player only game. Each of you attempts to use your air-blowing guns to shoot puffs at balloons to score points, pushing them onto your opponent's side. Both games work well, although they are both pretty simple, and Puff-gunners requires a second player to play.
FILE_ID.DIZ:
Balloonz! v1.0 by Adrian B. Danieli
1993 Acumen Software
-=-=-=-=-=-=-=-=-=-=-=-=-=-=-=-=-=-=-
VGA required,  SoundBlaster supported
Two action\arcade games in one!
Pop balloons while flying thru deadly
star fields, and blow your opponent
a way with your puff gun in game 2.

If you enjoy Balloonz, you might also enjoy playing these games:

Balloonz, #648. Added to website: 2018-07-22. All copyrights, trademarks, etc, are property of their respective holders.
Back to top
Rating:
Saving
Saving, please wait
What is a file_id.diz file?
FILE_ID.DIZ is a plain text file containing a brief description of the content in an archive (ZIP file), usually written by the developers themselves. It was often used in archives distributed through bulletin board systems (BBS).
Balloonz screenshot