DOWNLOAD THE GAME FREE
arena.zip - 150k - Run AR256.EXE to play
Downloading ...
Found your game? Great! Glad you found it! Please consider saying thanks by making a small donation to support DOSGames.com. There are also other ways you can help!
Need help running the game? Check our DOSBox Guide to run DOS games on modern computers.

DOSGames.com Review:  Rating: 3.5
Arena is a strategy game which the author states is based on a Commodore 64 game of the same name, although there's not much information about that original game available online. There IS a game called Chaos: The Battle of Wizards for the ZX Spectrum, and that game is cited by the similar game Morkin 2 as its inspiration, so maybe the author mis-remembered the platform he played it on. ANYWAYS! This game is a two to four player battle between wizards, who cast spells to attack their opponents or call forth magical beings to do battle. It's a turn-based game where you move your wizard and cast spells, and also direct your underling(s). The controls and gameplay are not very intuitive so you will definitely need to press the ? key to access in-game help and likely will need to reference ARENA.TXT for more details.
Instructions:
Turn on Num Lock
Press ? for more thorough in-game help or see ARENA.TXT
Arrows Move (use numeric keypad)
S Cast spell
F Fire (with dragon)
Space Next
T Fly
Q Quit

If you enjoy Arena, you might also enjoy playing these games: 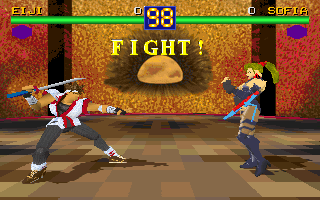 Arena, #1189. Added to website: 2020-08-17. All copyrights, trademarks, etc, are property of their respective holders.
Back to top
Rating:
Saving
Saving, please wait
What is a file_id.diz file?
FILE_ID.DIZ is a plain text file containing a brief description of the content in an archive (ZIP file), usually written by the developers themselves. It was often used in archives distributed through bulletin board systems (BBS).
Arena screenshot