My memmory of this game is so obscure that I'm not sure if I didn't just imagine it..
I think it was a demo of a game, so not sure if the game even came out.
I remember you had one or two (or three?) chapters to choose from, and I think you played as different characters in them.
One chapter was set during day, I think, I dont remember much about it, I think it was kinda generic fantasy stuff and you played as some sort of warrior, I think you had a sword with a golden ornate hilt. The other one was set during night in some half-ruined castle and it was very atmospheric. Reminds me of Nosferatu or Undying. I can remember a stsircase lit by either a moonlight or a lightning flash shining through arrow-shaped window, and some monster that looked like Alien or something running down the stairs. I think you played as a monster too in that chapter.
In terms of graphics I think it was simillar to those games I mentioned, maybe a bit more outdated. But I'm pretty sure it used poligons for characters and levels and it had lighting. My guess is that it's older than Half-life, but younger than Qake, but it's mostly based on my gut feeling.
Top

I really don't know about this one, my memory about this game is so vague.. The closest thing I could find in terms of setting and atmosphere was Battlespire, but I don't believe it's the one, that game has a lot of stuff I don't recognize. I don't remember there being a character creation, I think you just selected a chapter or a character and were dropped in game immediately. Maybe it was a demo for a game that never got a full release, or maybe it was just a dream I had as a kid about a game that I then thought was real, lol

So you did not transform, but played as two different characters?

Hack&slash type of game? Not platforming? Any mana type magic stats in the game you think?
In 97, win95 was just released; was your game a DOS or Windows game you think?

(Nosferatu that you mention was a SNES game what I see on Moby; could it have been a SNES game?)
Top

Rwolf wrote: ↑ So you did not transform, but played as two different characters?

Hack&slash type of game? Not platforming? Any mana type magic stats in the game you think?
In 97, win95 was just released; was your game a DOS or Windows game you think?

(Nosferatu that you mention was a SNES game what I see on Moby; could it have been a SNES game?)

Oh, my bad, I didn't mention the platform, it was on PC for sure, I didn't have any thing else to play games, so it was either DOS or Windows. And by Nosferatu game I meant the one subtitled 'Wrath of Malachi'.

I don't remember any additional screens in game that would show stats or inventory, but I might've just overlooked it or forgot. I don't even remember if it had any HUD.

I'm pretty sure it was just Hack&Slash in a fantasy setting, not an RPG, maybe like Hexen or something. There might've been some sort of story, and I suspect that by selecting different character/chapter you would see it from opposite sides. One 'good' and set in daylight, and other 'evil' and set in night in some ghastly castle. Also, I suppose it is possible that you played the same character in both chapters, perhaps demo highlighted two different parts of the game and how your character changed between them.

Anyway the latter chapter was more alluring to me as a kid I suppose, because I only remember a bit of gameplay in that castle. I remember walking the stairs in the tower, that was moonlit through a window and some jagged bony featureless beast running at me. I don't remember any gameplay beside that, so either demo was very short or I died there every time. Hmm.. Actually, I think I can remember that in the former chapter you were exploring outer walls of that castle and you had a sword. And in the chapter inside the castle at night I think you didn't have anything like a sword or a weapon obstructing your view, because I think you played some sort of non-human creature.

..So now that I thought hard about it for a while, Return to Castle Wolfenstein came to mind, because I think I was comparing these two games somehow. So perhaps I was wrong placing it in 1997, perhaps it's actually early 2000's..
Top

Hmm, the Wheel of Time seems promising, I'll have to check it out thoroughly 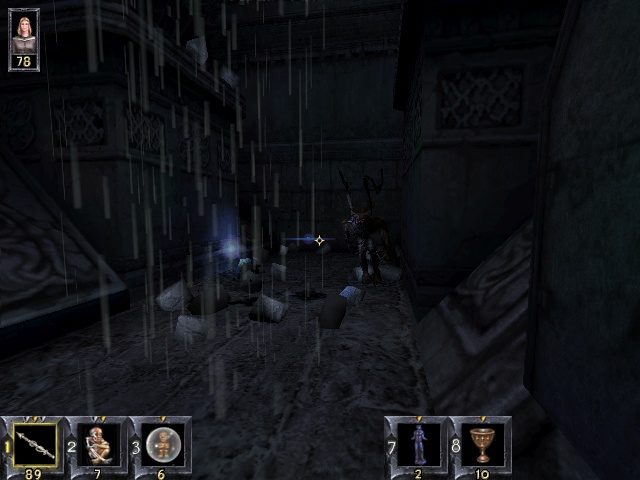 Yeah, I watched the first few minutes of this game and it hit all the boxes in terms of visuals and atmosphere. Going from daylight to moonlit night and lightning. And that sequence with the stairs in the castle and weird jagged monsters is there. So I think I actually got it.

I guess it was just a level selection in the demo and I got confused and thought you played as different characters in those sections. And the part with having a sword I just imagined, I guess, because it's something you would expect in such game.
Top

Good you found it; it seems to have some issues (safedisc) on later operating systems, some patching may be needed.

There is a Wiki for the game here: https://www.pcgamingwiki.com/wiki/The_Wheel_of_Time