I have been racking my brain for the last few months trying to remember the name of this game I used to play a long time ago.

It was a space themed game.

You controlled a mother ship that had customization components, and you had a limited amount of bays to install these modules There were fuel tanks, and missile launchers and point defense system modules that you could purchase with materials.

You flew the mother ship through space viewing the map from above.

You would go to planets and then deploy a small fighter like ship that you "drove" across the surface of the planet to collect spheres of varying size and color that represented the different elements and material needed to purchase upgrades.

There were black tentacled enemies that spun around and were very difficult to kill.

I hope I gave enough description!

Thank you for your time.
Top 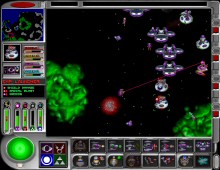 "Drive a ship across a planet" sounds like Star Goose.
Top

It's definitely Star Control 2 and you can get a proper port of it for windows if you search for the game "The Ur Quan Masters". I suggest getting the extra sound files for it too!